I’m from the south so I’m a HUGE football fan…though the teams I root for are different than my roots. Being from Texas, of course I have to root for the Dallas Cowboys, but MY team—through thick and thin—is the Denver Broncos. How did I stumble upon this obsession with a team 500 miles away from where I grew up? Well, my stepdad used to live in Denver. My mom started dating him the year the Broncos won their first ever Super Bowl. I watched that game and the Super Bowl after that, in which they won both. I loved John Elway, Terrell Davis, Mike Shanahan. They were a dream team.

Even though the Broncos haven’t been so good in the years after those back-to-back Super Bowl wins, I’ve still rooted for them. When Peyton Manning and John Fox came over to the Broncos, my interest piqued again. Peyton was THE MAN. One of the greatest players ever, and so very deserving of that title. He’s a kind, soft spoken, hard working guy. So, as you can tell, I’ve been super amped this whole season. After the heartbreaking double OT divisional loss to the Ravens last year, I was out for vengeance this year.

Even though I was nervous and on pins and needles all day yesterday leading up to the AFC Divisional game against the Chargers, I still was able to make some “Football Finger Foods”. Dubbed the NFL Playoff Foods, this series will go on through this week leading up to the Broncos AFC title game. Party foods, appetizers, finger foods and even 4th Quarter meals will be involved.

Up on deck first is a crab-stuffed mushroom recipe I acquired through my Aunt Lindy. She had made these once before for a Christmas Eve party a few years back, and they were delicious. And not nearly as hard to make as you might think! The crab, green onion and dill make these stuffed mushroom caps taste like a little bite of heaven. The perfect “fancy” football finger food! 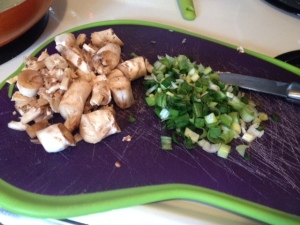 3. Melt remaining butter in a 9×13″ baking dish. Turn caps in butter to coat. Spoon 2 TBS. of filling into each cap and place filling-side up in baking dish. Sprinkle with remaining cheese and pour Sherry over the top. Bake at 400 degrees for 15-20 minutes or until tops are golden brown. Serve with lemon wedges. 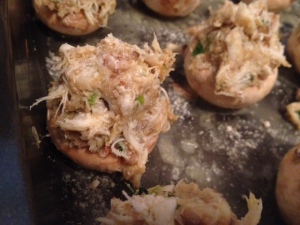 Stay tuned for more tasty football foods in honor of the 2014 NFL Playoffs!