A few years ago, a friend of mine and I went to dinner at this cozy little restaurant in Randlett, Oklahoma called ‘The Feed Lot’. It was a small, hole-in-the-wall type place, but all of the locals raved about the food. We decided we had to take our food adventure inside to try the fare. Almost every ‘local’ restaurant in rural Oklahoma & Texas specializes in either barbecue (with a heavy emphasis on brisket) or homefried goodies. The Feed Lot was the latter: chicken fried steak, catfish, and fried chicken were all found on their menu along with a decent selection of steaks. I can’t remember what I had for an entrée, but it was one side dish that stuck to my tastebuds and my memory—a cheesy, ooey-gooey yellow squash casserole.

I have always favored zucchini over yellow summer squash, but their casserole made me forget about the normally bland taste of boiled or steamed squash. It was so cheesy and creamy, but it didn’t overpower the entire dish. I was hooked. I had to have more. I HAD to figure out how they made that southern delicacy.

I haven’t been back to The Feed Lot since, and I never asked for the recipe. A few months ago, though, that side dish popped into my mind again. Great food will do that to you—you can forget about for years, but then you will suddenly find yourself thinking about it, and then…wanting it. Oh god, did I want that squash casserole. I contemplated driving two hours just to get that casserole. Instead, I took to the internet and found the first recipe that looked slightly familiar. It was good, but it wasn’t the squash casserole. So a few weeks later, I tried another recipe. It was a complete disaster. The supposedly creamy, cheesy sauce was more like a liquidy, slimy mess. I was devastated. Thoughts of giving up, and little angry squash-men, flashed through my mind. I would never find the recipe, I would never taste that heavenly taste again.

But then, a few months later, I took to the internet once more. After scrolling through pages upon pages of squash recipes, I found a recipe that sounded like the squash casserole I dreamed about…with a few variations that sounded great to me. Add zucchini? Great! Chop up fresh herbs and add to a panko top crust? Sounds fantastic! Cheesy béchamel base? Yes, please!

This isn’t quite the squash casserole that I yearn, but it satisfied my craving and made my heart happy. Hopefully, it will do that to yours, too. 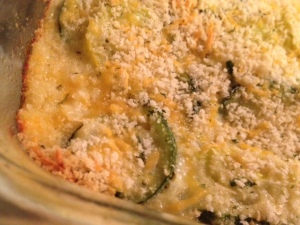 1. Preheat oven to 350 degrees. Brush an ovenproof casserole dish with oil. Bring a pot of water to a boil over high heat. Place the squash, zucchini and onions in the pot. Boil until slightly tender, about 5-10 minutes. Drain and transfer the veggies to a bowl.

2. Heat the oil in a saucepan over medium heat. Add the flour and stir until tan-colored. Add the milk and whisk until smooth. Bring to a boil over high heat, while whisking, until thick. Remove from heat, then add 1 cup of the cheddar cheese and stir until melted. Sauce should be pale orange. Taste and adjust for seasoning by adding salt and pepper as needed.

3. Pour the sauce over the squash and onions in the bowl; stir to combine. Add the eggs, half of the breadcrumbs, and half of the herbs and stir to combine. Transfer the mixture to the prepared casserole dish. Combine the remaining 1/2 cup breadcrumbs, herbs, 1/4 cup chedder, and Parmesan in a small bowl and then sprinkle on top of the squash mixture. 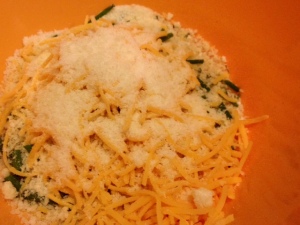 4. Bake until firm and brown on top, 30 minutes. Remove to a rack to cool slightly before serving. 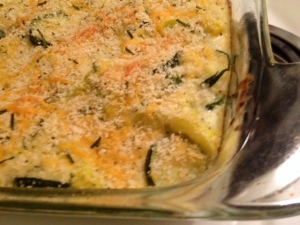 Oh, I’m going on my week and a half vacation next week! If you don’t hear from me in the next week, it’s because I’m in the desolate yet beautiful state of Montana getting in touch with nature 🙂

One thought on “Summer Squash Casserole”