I sense instability in the force.

Six days ago, the National Weather Service in Norman, Oklahoma sent out it’s predictive outlook for Tuesday, April 26th. That outlook? Not good. The instability of the atmosphere, coupled with warm temperatures and low humidity, has set us up for a moderate severe weather event tomorrow. Six days is an awful long time to be predicting weather, so if they were sending out enhanced warnings that far in advance we are bound to see some nasty and cruel weather tomorrow.

Here’s a look at the most recent “risk” graphic from the NWS:

By the way—when there’s a moderate risk day, there is almost ALWAYS a tornado. So, it looks like I’m going to be having a very long day at work tomorrow storm chasing.

Good thing I just had a vacation to rejuvenate my work ethic…Rob and I went to Kansas to visit his family, his friends, my dad, and to soak in a nice baseball game at Kaufmann Stadium in Kansas City—where his beloved World Series Champion Royals play. 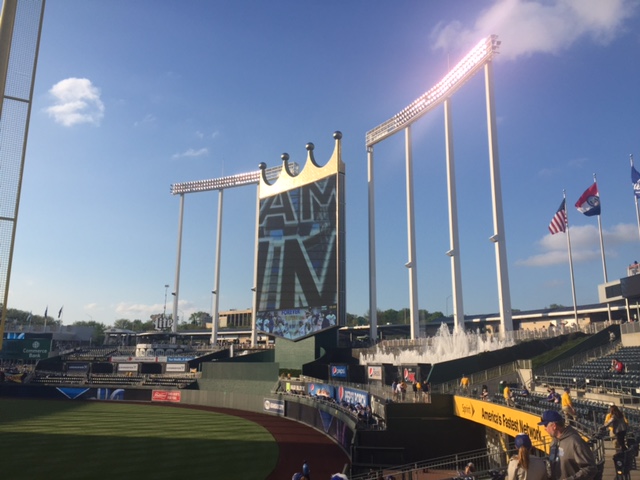 We also tried Jack Stack’s BBQ while we were in Kansas City. It was ranked high on the list of restaurants for having good KC BBQ, so we had to try it out. The verdict: AMAZING! I had never had Kansas City style BBQ before, and I would now rank it right up there with Texas BBQ in the deliciousness category.

KC BBQ puts a heavy emphasis on the ribs of the animal: pork spare ribs, beef short ribs, beef prime ribs and pork baby back were ALL offered on this menu. “Burnt Ends” are also a big deal at all of the KC restaurants I looked up. What is a burnt end? They’re basically scraps leftover from slicing brisket (or pork shoulder) that are then seared and doused with BBQ sauce.

I got the burnt ends and spare ribs at Jack Stack’s along with a side of “cheesy corn”. Yep, cheesy corn. Corn with cheese. Cheese. Corn. What could be better than combining cheese and corn? And more importantly—HOW COME I HAD NEVER THOUGHT OF THAT BEFORE? Apparently cheesy corn is a thing in Kansas City. It was also served at the BBQ concession stands in the stadium! Brilliant. Absolutely BRILLIANT.

The Royals won, by the way, 4-2 against the Orioles. Rob also went to the game the next day (which they lost) and I went over to my dad’s to have a cooking date with him.

If you have ever wondered where my mad cooking genes have come from, it is probably from my dad. He shares the same enthusiasm for cooking new (and old) recipes like I do. He can also develop flavors like no other; we made a stuffed shells Bolognese together that blew my recipe out of the water.

So, after lots of good food and good laughs and good fun—we left Kansas. It was a super quick vacation, but a great one nonetheless. Now, as I count down the hours until we get blown away, I’m trying to remember this recipe I made for a jam cake last weekend.

I think Jam Cakes were created years and years ago to make baking a cake more flavorful if cocoa or fresh fruit wasn’t available. Almost all jam cake recipes I’ve run across have included either a strawberry or raspberry jam and buttermilk.

I kind of combined and experimented with a multitude of different recipes to concoct this dense, flavorful bundt cake. The original recipe was for a three layer cake, and I wasn’t about to waste a whole afternoon on such a monumental baking task. I can make bundt cakes pretty well, so I expanded the baking time since a bundt pan is much deeper than a circle pan.

The frosting for this recipe I made up on the fly. I basically just adjusted the frosting recipe from my cherry limeade pound cake to include maple extract instead of cherry 7Up.  This cake was thick and dark and yummy—and only slightly sweet with the fruity flavors of two jams. It provided a wonderful dessert for the weekend, and it was also good for breakfast!

Look at how DARK the cake turned out on the inside! I’m attributing that to the red jellies I used. By the way, does anybody know the difference between jam, jelly and preserves? If you do, let me know in the comment section below!

One thought on “Texas Jam Cake with Maple Frosting”