I had my first swig of Guinness this weekend. Can you believe it? I’ve spent 32 years on this planet with a very Irish name and never had a drop of Guinness.

The verdict? It’s some, ahem, potent beer. It’s not really my cup of tea. I like my beers light, refreshing, and almost like soda.

Guinness is very strong, dark, and leaves a hefty aftertaste in your mouth. I can see why people like the stuff, it just isn’t for me.

That doesn’t mean I won’t cook with it, though. I’m a huge fan of cooking with alcohols (don’t tell me mom) and beer is one of the best things you can cook with in my opinion.

Armed with Guinness, I set out to make a classic Irish/Brit dish for the St. Patrick’s Day holiday. Bangers and mash is one of the few good meals to come out of those islands, and it can’t really be messed up. Get you a good quality sausage, whip up some mashed potatoes, and then drown everything in brown gravy. Sounds incredible, right?

Add some onions and Guinness to the gravy and you’ve got yourself and even more incredible meal. 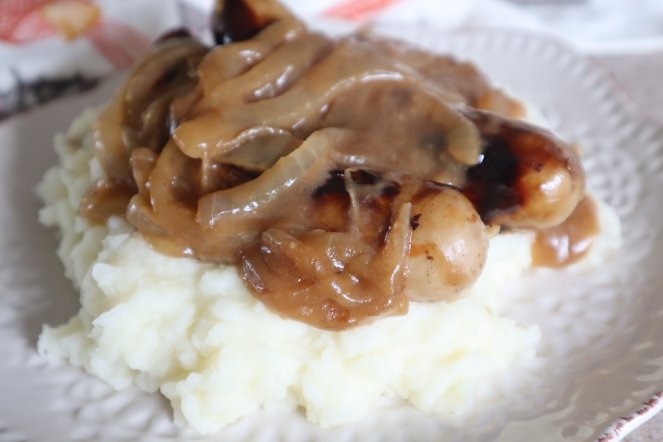 I found these “authentic Irish bangers” at Costco and they turned out tasting pretty well. They were like a bratwurst, but not as powerful in flavor. The sausages worked well with my potent stout-onion gravy.

Don’t pour out that Guinness if you don’t like it—make a gravy instead. That should be my life’s new motto. 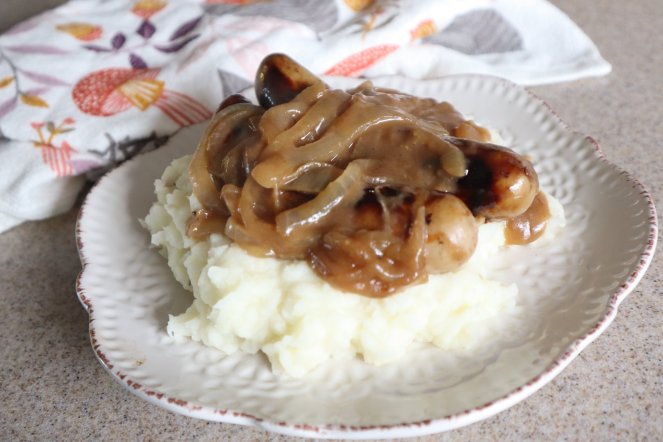 A classic Irish dish made better with a flavorful stout-onion gravy.

For the stout onion gravy: