I’ve been so busy prepping and cooking my way to a successful month of September—Squash September!—that I’ve neglected to post any recipes this past week. It’s not that I don’t have anything to post; no, it’s quite the opposite…I have too much to write about.

Unfortunately, the only things I’ve been cooking lately are recipes that I am saving for after September starts, recipes that include my beloved squash.

I did manage to make this recipe last weekend (I actually forgot all about it) and thought I would at least write it up to satiate my readers appetite. This is another decent slow cooker “dump” recipe, where you just dump everything in a crockpot and let it cook while you’re at work.

I thought the gravy was pretty tasty, and would’ve tasted even better over some hot mashed potatoes like the recipe originally called for. I didn’t make any mashed potatoes so I just served the chicken with a ladle of gravy over the top of it along with some mixed veggie and rice. Voila! A healthy, delicious dinner that takes little-to-no effort at all to make.

Sprinkle chicken with salt and pepper. Place half in the bottom of a slow cooker. In a bowl, combine the apples and onion; spoon half of the mixture over the chicken.

Repeat the layers of chicken and apple & onions. In the same bowl that the apple and onions were in, whisk together the wine, gravy mix, garlic and herbs until well blended. 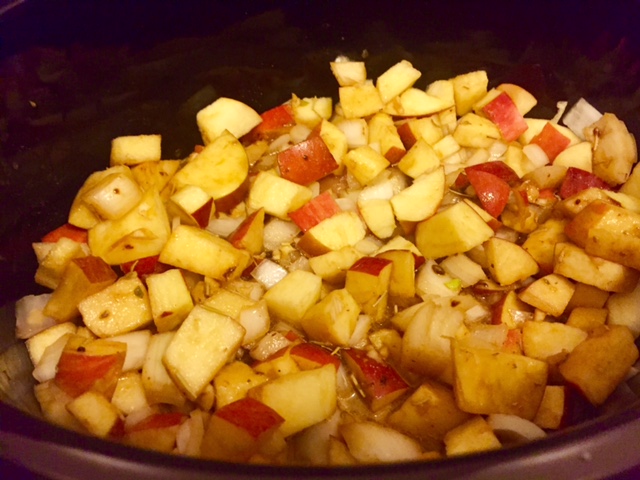 Pour bowl of sauce over the top of the chicken-apple-onion mixture. Cover and cook on low for 6-8 hours or until chicken is tender. Remove chicken to a serving platter, keep warm. Cool apple mixture slightly; skim fat. Put apple mixture into a blender. Cover and process apple mixture in batches until smooth. Serve blended gravy over chicken. 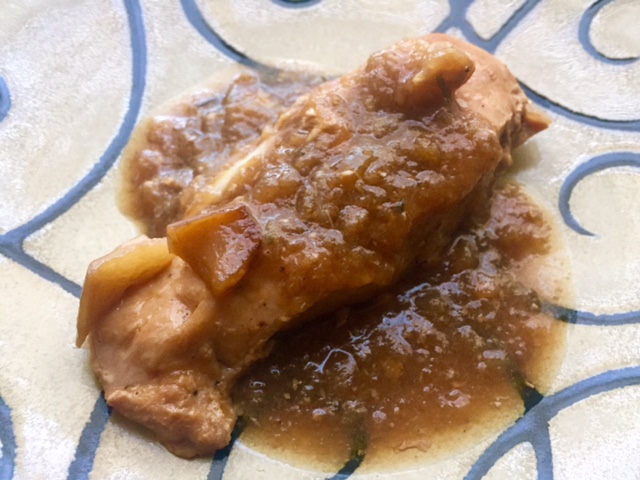