A coworker and I were talking about our favorite foods this morning.

“My favorite food is Mexican,” my coworker, Alana, said.

I couldn’t really pinpoint down a favorite food, per se, but I could whittle it down to two different types of foods: Mexican and Asian. If you look at most of the recipes I’ve posted over the years, those two categories probably make up a good 2/3rds of my blog. I don’t know what it is; I just keep coming back for more. 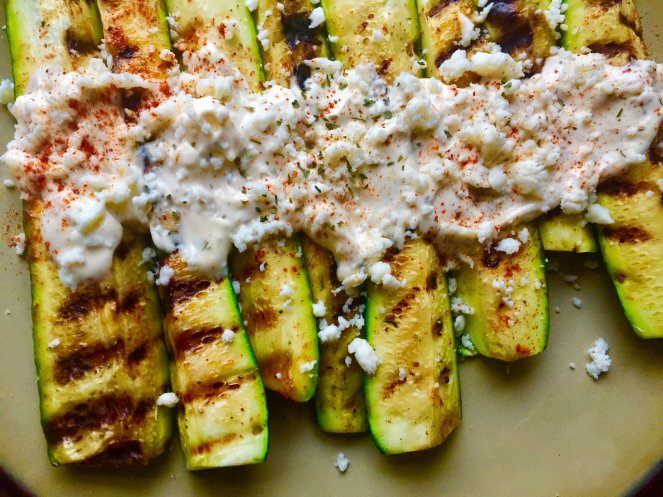 When I scroll through Pinterest, most of the things that catch my eye are either Mexican or Asian-inspired. Salads, tacos, sandwiches, stir-frys, tortas, side dishes…you name it. Mexican food just makes sense to me. I grew up in Texas, a stone’s throw (or a short drive) away from Mexico. Asian food has also had a profound impact on my life though I can’t nail down precisely why. The earliest I can remember is when I was in grade school, my mom asked me where I wanted to eat for more birthday dinner.

China Star was my answer. The biggest and best Chinese buffet at the time. I know, Anglo-Chinese buffets in Southern America aren’t the ideal Asian restaurants, but at the time I was smitten. The rest is history. I’ve now branched out, thanks to a massive population of Asian people living in Oklahoma City, to Korean, Thai, Japanese, Malaysian, and Vietnamese food. All of those categories I adore. 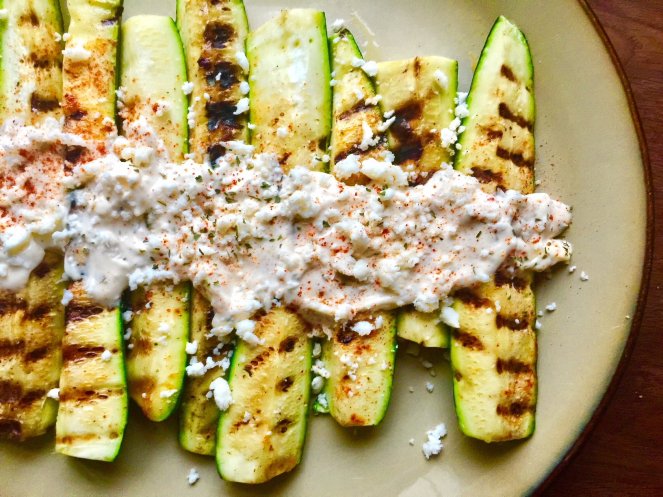 One of my most favorite Mexican dishes is elotes or corn in a cup. It’s a Mexican street-food snack served all throughout the southside of Oklahoma City, and I’m going to go out on a limb and said it’s a favorite in the home country as well. Grilled or boiled corn mixed with mayonesa (mayonnaise, duh), butter, queso fresco, lime juice and chili powder. It’s simple and refreshing, especially on those sweltering days when the city’s temperatures exceed 100 degrees.

Playing off the street corn idea, I decided to swap out the corn for a different vegetable. You know, to make it more healthy—or something like that. Mayonnaise mixed with butter and cheese isn’t exactly the pinnacle of health and well-being, but hey, minor tweaks for a better life, am I right? 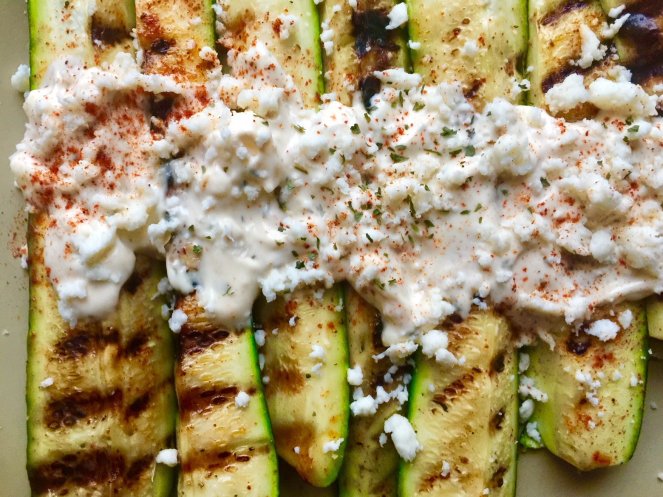 I’m surprised my grill pan hasn’t broken in half by now. I’ve used it since getting it as a wedding gift a few months ago. Shoot, that reminds me, I still need to get out thank you notes. It’s been well past three months since our nuptials. Oops.

Grill up some quartered zucchini and slather them with the mayonnaise-butter-cheese mixture. It’s a side dish sent straight from heaven, or a snack to curb your salty cravings. Despite all of the calories, you can’t forget that you’re eating something green. I think any New Year’s resolutions are safe with this recipe. 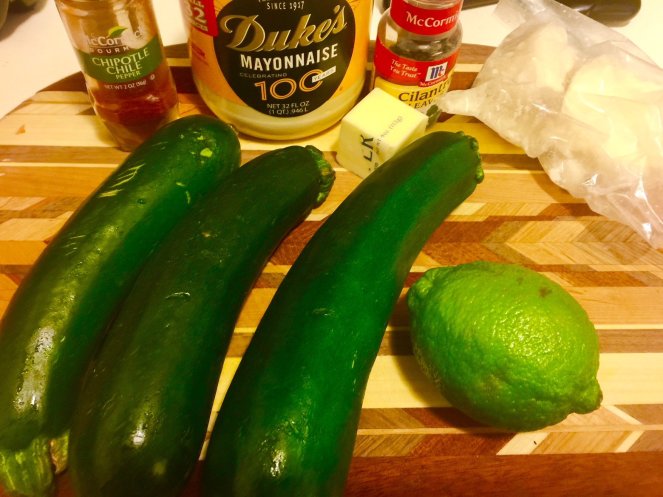 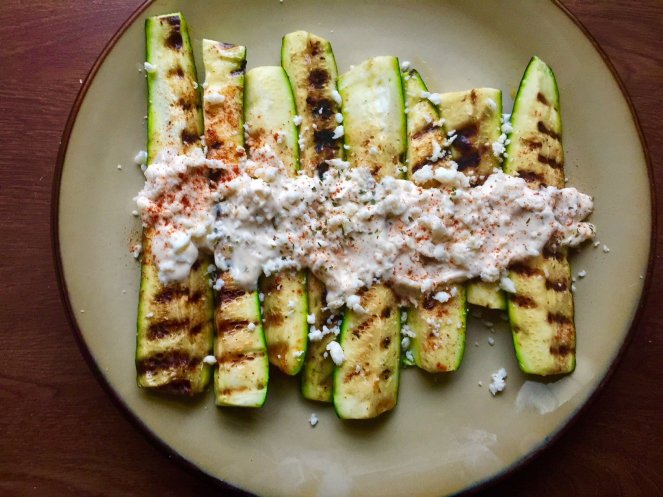 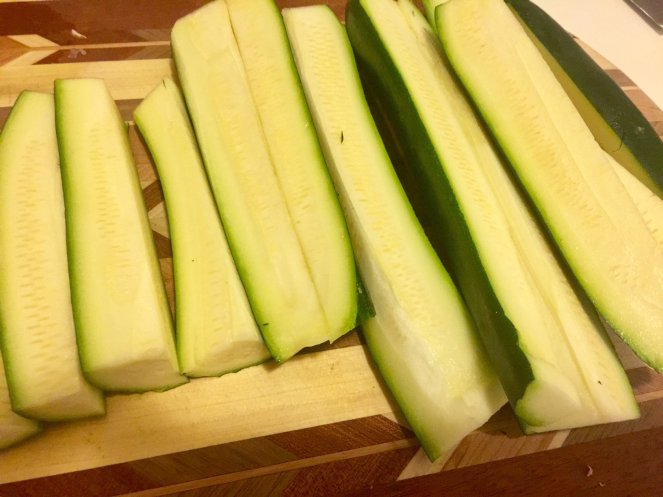 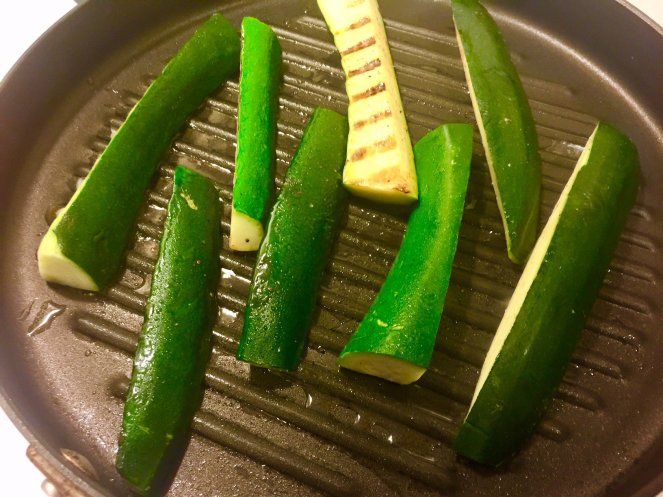 Grill zucchini about 2-3 minutes per side until char marks form & zucchini is semi-soft. 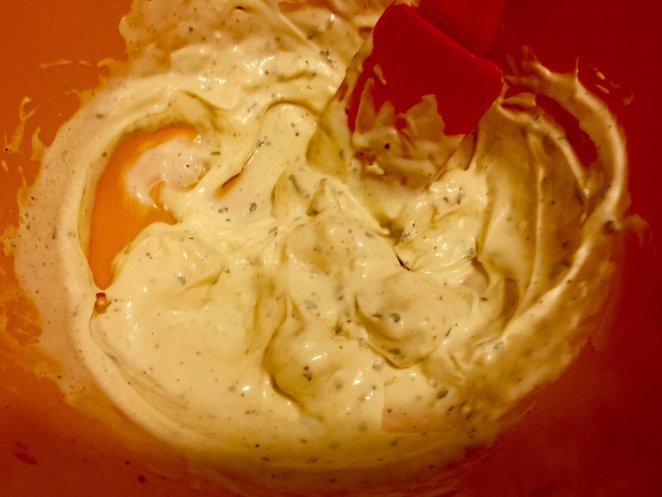 In a small bowl, stir together mayonnaise, butter, cheese, cilantro and lime juice. 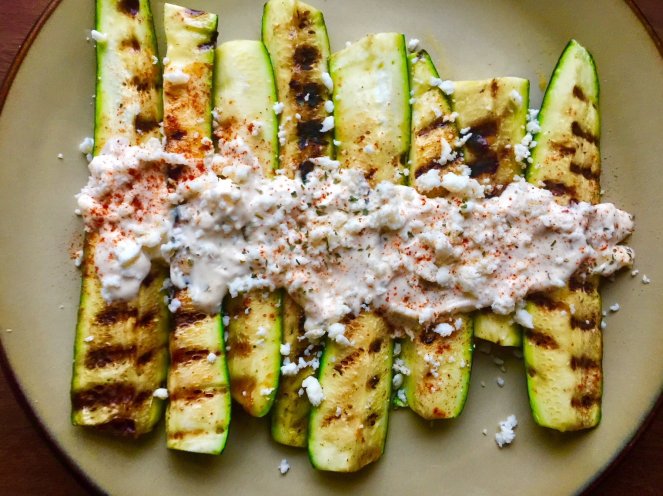