Well, basketball was my life…for many, many years. I played the sport for about 10 years when I was a kid, and it enveloped my entire life. I’m fiercely competitive, and it was my outlet while going through elementary, junior high, and high school. I quit playing during high school, but I still think about what that simple sport taught me about life.

Basketball mainly taught me that teamwork truly is the end-all-be-all. It taught me how to be a leader, and how to work with others toward a common goal: to win. No wonder I work in TV news now—-working with a huge team that wants to win ratings. We do better in life working together than we do working against each other. 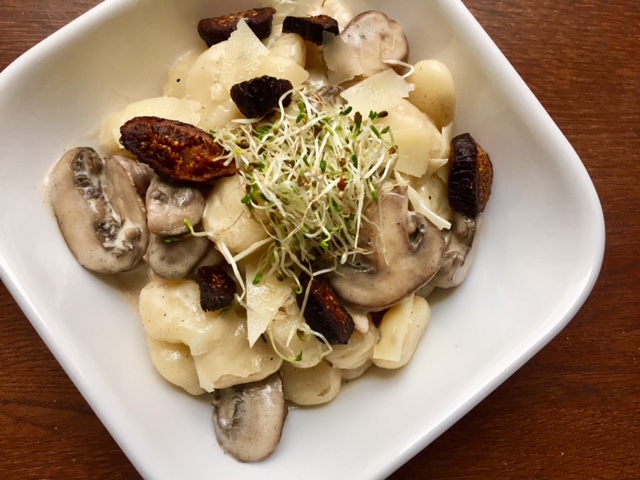 The apex of basketball, in my opinion, is the NCAA men’s basketball tournament. A field of 68 teams that gets whittled down until only one remains. Year after year you see a handful of the same teams; legacy schools. Those are the teams guided by a thorough hand; teams that know how to work with each other so well that they resemble gears in a machine. I love watching the tourney, and so does half of America. Most people fill out brackets and pay more attention to college basketball than they do their own jobs during the month of March.

In honor of the Big Dance, I’ve decided to do Meal Madness. I sort of explained it in my last post, but I’ll give you a refresher: I’ll be cooking and writing up recipes that are inspired by teams in the tourney.

Of course, I had to start with Kansas University. Basketball technically was born there. James Naismith, the man who created the game, coached there. Visiting Allen Fieldhouse is like having a spiritual awakening. The Jayhawks have the longest current streak of NCAA tournament appearances: 27. Bill Self is a god. The history, and victories, run deep.

But most importantly, my dad teaches there. I’ve been to Lawrence, Kansas more times than I can count. My fiance is technically from that area (Topeka is only 30 or so minutes away). I’ve grown up in Jayhawk gear. I still remember a red and blue basketball my dad gave me when I was a kid, and cherishing every moment with that ball.

When I go up to Lawrence to visit my dad, we always find time to go to our favorite restaurant and brewhouse: Free State. Every single time we go, I get the same thing: mushroom gnocchi. 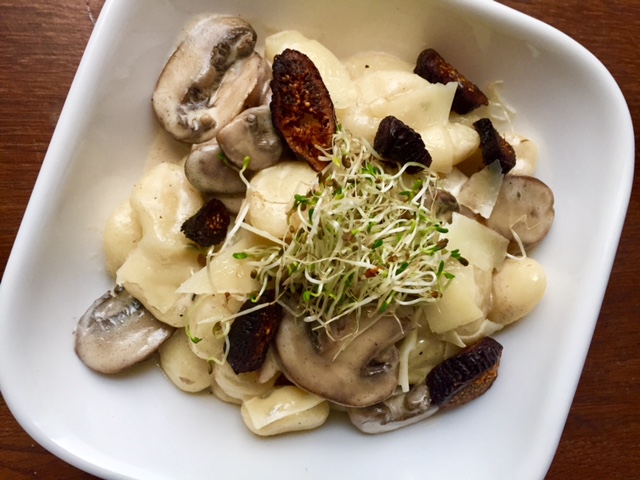 I know, I know. Mushroom gnocchi doesn’t really invoke the Kansas theme much. But it’s the food I love most in the same town as the basketball team I love most. Free State’s gnocchi is so good, you don’t need to eat a protein with it. The creamy sauce has meaty chunks of portobello mushrooms in it. It’s topped off with Mission figs and delicate microgreens, then they grate Parmesan over the top. It’s heavenly.

I’ve tried to make my own gnocchi before and it was a disaster. I did everything perfectly and it still came out gummy. For this recipe, I just bought some gnocchi. No need to make it more difficult than it already is. I made the Free State imitation cream sauce out of heavy cream, white wine and portobellos. It worked! One bite and memories flooded back. It felt like I was sitting with my dad in that downtown Lawrence restaurant. 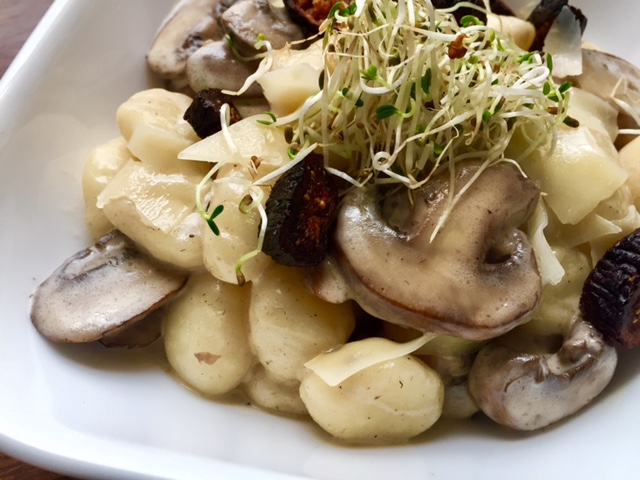 Bring a large pot of salted water to a boil. Add gnocchi and cook until they float to the top. Drain. Meanwhile, make the sauce. Melt butter in a large skillet over medium heat. Add mushrooms and cook until brown, about 4 minutes.

Stir in wine and cook until reduced by half, about 5 minutes. 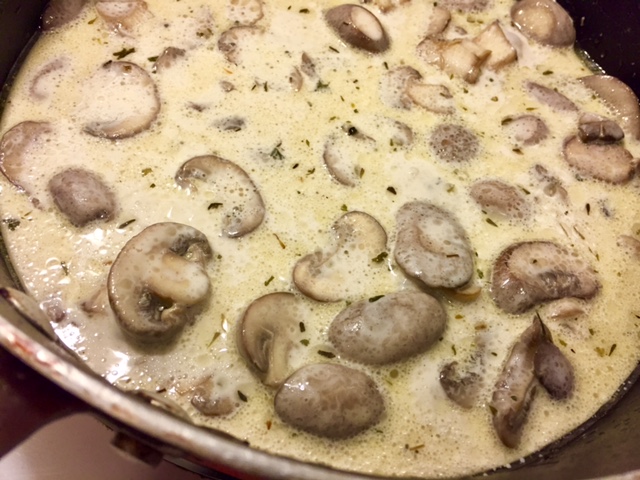 Stir in thyme, pinch of salt, pepper to taste, parsley and cream. Let sauce gently simmer for another 2-5 minutes.

Add cooked gnocchi to sauce. Stir and coat well and continue to cook for about 2 more minutes. 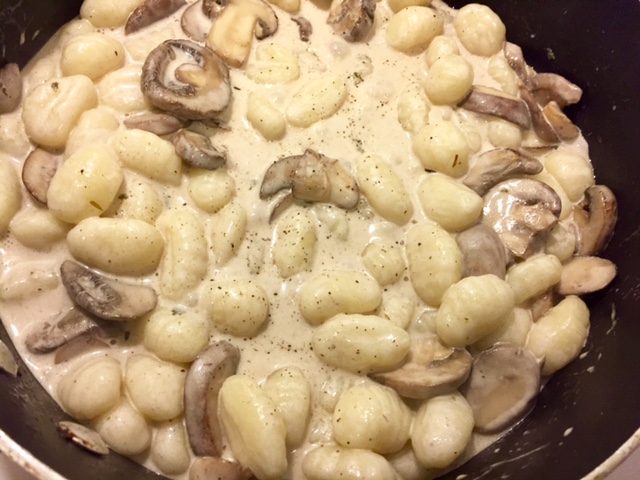 Top each serving with Parmesan, alfalfa sprouts and figs. Season with salt and pepper.