So, my Memorial Day weekend camping trip has hit a snag.

After multiple views of model runs for the weather, we decided to postpone leaving for Sulphur until tomorrow. Rain, wind and hail is supposed to descend on Murray county tonight and that massive storm will last for a whopping 5-6 hours! I didn’t think camping would be much fun under those conditions.

It’s also supposed to be much cooler tomorrow—by about 20 degrees. That’s probably bad for swimming in freezing cold spring water, but good for afternoon hikes and pitching tents. A couple of people were only supposed to camp tonight, so we made sure to reschedule for a few weekends from now, too.

I guess I’ve got to get use out of all this camping gear I’ve acquired over the last few weeks, so why not camp a few times this summer? 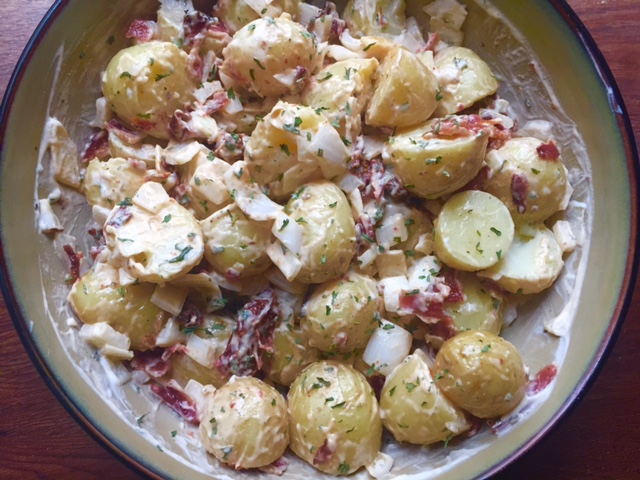 Since today was a bust, I decided to cheer myself up with some good Memorial Day weekend food. I cooked up the bratwurst I was going to take and made a fancy potato salad to go along with it. Like I’ve said before, I’m all for different types of potato salad—-and I’m constantly cooking up strange versions. This recipe is another notch under my potato salad belt. 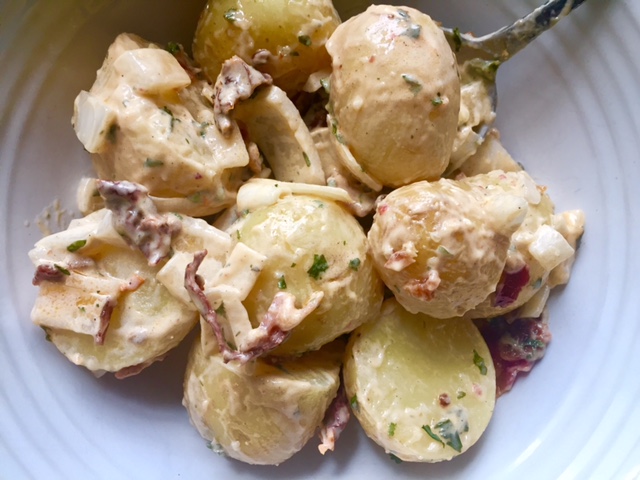 It’s pretty basic, ingredient-wise. Vinegar, mayo, a couple of spices, bacon—but the real stunner here is the addition of sun-dried tomatoes. The original recipe called for fingerling potatoes, but I couldn’t find any at the grocery store. I did, however, see a stocker filling plastic bags with some baby white potatoes (they were called white rose potatoes) and decided to use those instead. They were so creamy and perfectly bite-sized!

If you’re a fan of sun-dried tomatoes, or just a fan of trying out different potato salad recipes—-then this one is for you.

Oh yeah, and have a happy Memorial Day weekend! 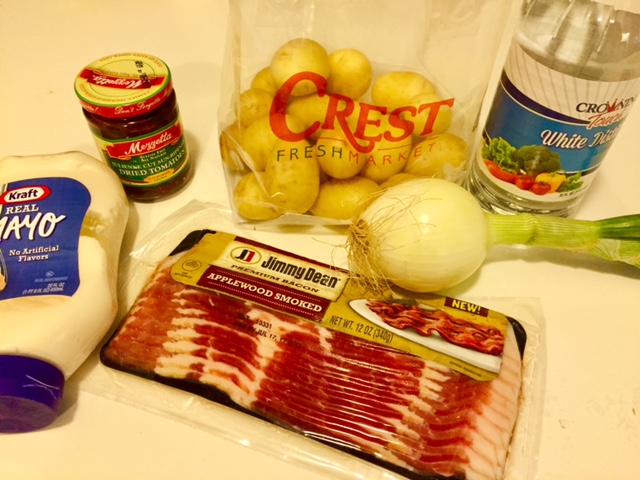 Place potatoes in a large pot and cover with water. Add a pinch of salt to the water and place on stove to boil. Boil potatoes until soft, about 15-20 minutes. Drain and let cool. In a large bowl, toss potatoes with vinegar. Meanwhile, in another large bowl. stir together onion, sun-dried tomato, bacon, sage, parsley, salt and pepper.

Stir together until well-combined.

Add potatoes and mayonnaise to bowl…

Toss everything together until it is well combined. Serve either at room temperature or cold after refrigerating. 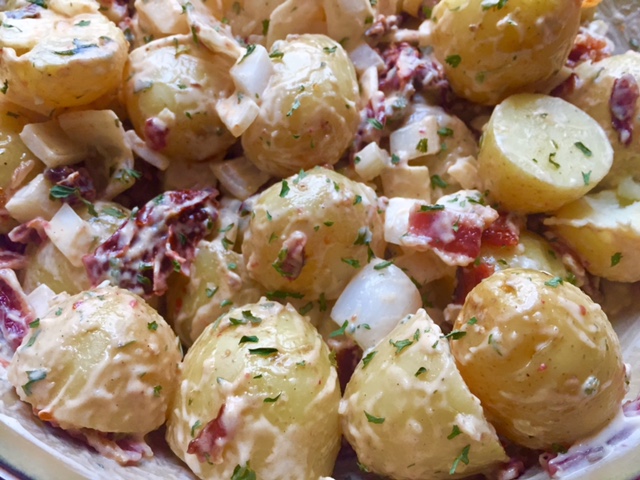