Breakfast isn’t, nor has it ever been, my favorite meal of the day. When I was a kid, I used to whine when my mom and I went to breakfast. 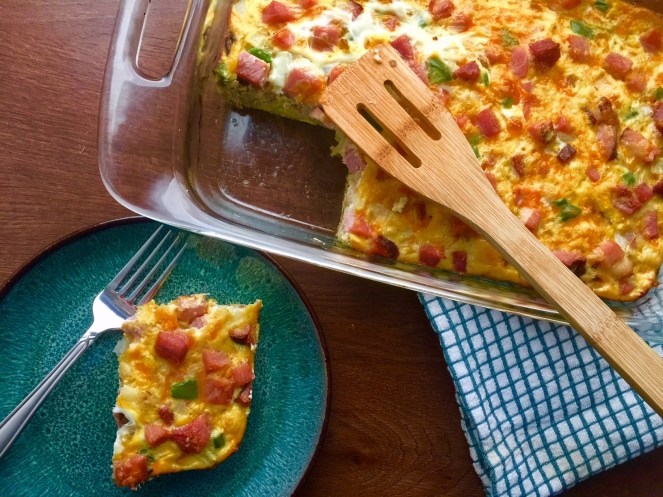 My mom, though loving, probably gave me the side eye a lot back then. What’s not to love about breakfast? It can be sweet, savory, hearty or light. I’ve grown up a lot since then, but breakfast still isn’t my go-to meal.

In fact, if Rob and I happen to go out for breakfast, I generally stick to one of two items: eggs benedict or an omelette. I’ve never liked sweet breakfast foods. I mean, I like them. I just don’t choose to make or eat them.

Eggs benedict can be so luscious and well done. I’m a sucker for a perfectly poached egg, and hollandaise sauce is my favorite of all sauces. As for omelettes, I think back to a restaurant in Wichita Falls: Sunrise and Shine Omelette Grill. That little divey-diner’s menu includes two pages worth of omelettes. Everything from corned beef hash omelette (it’s incredible), to a cream cheese and avocado omelette (cream cheese in an omelette is seriously the best).

If I’m just going to a regular breakfast joint, though, my go-to omelette is the Denver. There’s something so elegant about its simplicity that draws me in. Plus, I tend to have a heavy hand with hot sauce, and everything in that omelette soaks up a good tangy hot sauce like bread to butter.

I promised I’d talk about my incredible 2-part honeymoon, so I figured I’d break it up and start in this post. See, Rob and I went on a cruise to Mexico. As you might have guessed, you can’t quite cruise out of Oklahoma. No, no. We opted to set sail from New Orleans, and since there are no direct flights out of OKC, and since we are big fans of road trips, we decided to drive the 10+ hours to NOLA. 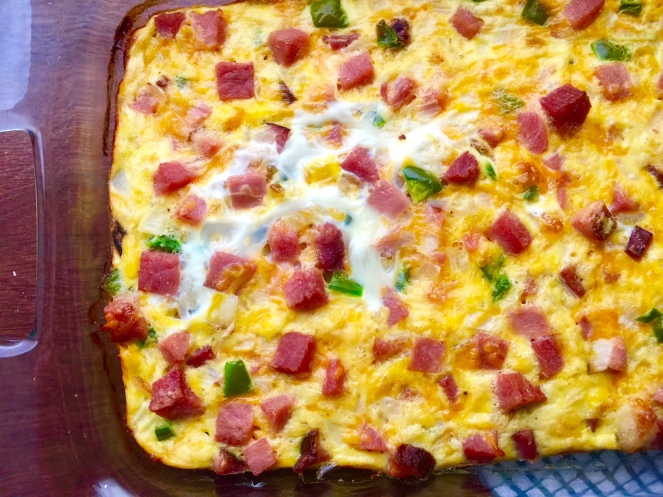 I love Louisiana. It is the mecca of American Southern cuisine. My aunt lived for a while in Monroe, and my mom owns one of the best cajun cookbooks (River Road Recipes II). My mom’s gumbo is the flyest thing you’ll ever taste—-minus the okra. I actually despise okra!

We drove down to NOLA a day early. Our ship didn’t leave the port until 4 p.m. the next day, so we grabbed some breakfast. Instead of going down to the Quarter to eat a typical tourist breakfast, we stopped by a little cafe in the Gentilly district.

We were greeted by some local coffee drinkers who joked with us and bought us the house specialty: pan perdu.

I told you I don’t normally like sweet breakfasts. This, however, was the absolute best French toast I’ve ever had in my life. It was so good it didn’t even need syrup. Wow. I was blown away!

The pan perdu would’ve been enough, but since I was in Louisiana, I had to get a shrimp omelette. Let me tell you, that omelette did not disappoint. I put a few dashes of Crystal hot sauce on it and went to town.

We were lucky enough to have one more breakfast before we left New Orleans. Our ship docked in NOLA after five days at sea at 8 a.m. on a Saturday, so we spent the day on a culinary and tourist tour of the Quarter. And you can’t go to NOLA without stopping by at a landmark…

Cafe du Monde! Chicory coffee and beignets were a must. I think this may have been Rob’s favorite meal of the trip.

Now that we’re back home, I wanted to make a breakfast that was both homey and hearty…something that reminded me of all the good breakfasts we had in New Orleans.

I scrounged up an oven-baked Denver omelette recipe (remember, Denver’s are my favorite) and decided to give it a nice, crispy hashbrown crust.

Make sure you have the hot sauce handy! 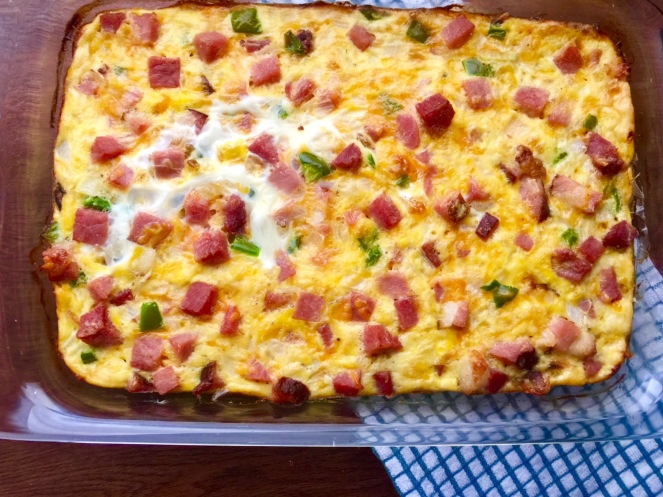 A filling breakfast bake for a family meal. 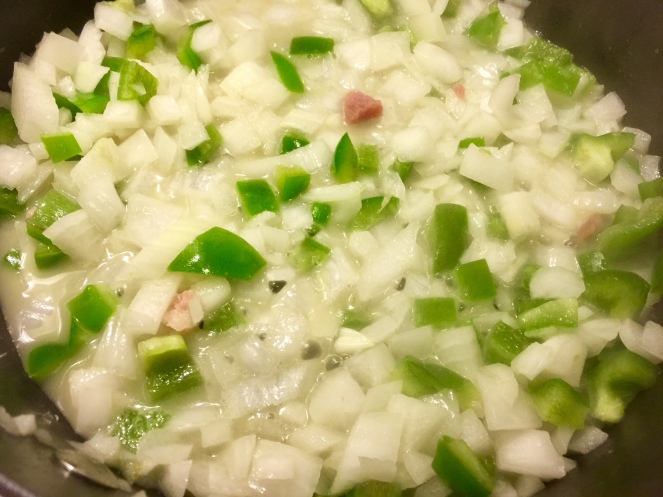 In a large skillet, heat 2 tablespoons butter over medium heat until melted. Add onion and pepper and quick-saute for 1-2 minutes. You don’t want to cook it for too long since you’ll be baking it, you just want to saute it to release some of that flavor and aroma. Remove veggies from pan to a large bowl.

Cook hashbrowns (see above). Once onion and pepper are cooled, add ham to the bowl. Whisk in ten eggs and cream.

Season with salt and pepper and add cheese.

Grease a 13×9″ baking pan. Preheat oven 400 degrees. Place cooked hashbrowns in a layer on the bottom of the prepared pan. 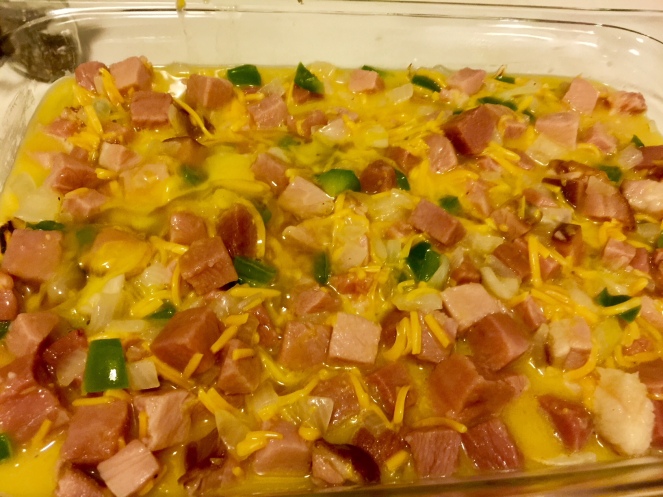 Pour egg mixture on top. Bake, uncovered, for 20-25 minutes until golden and fluffy. 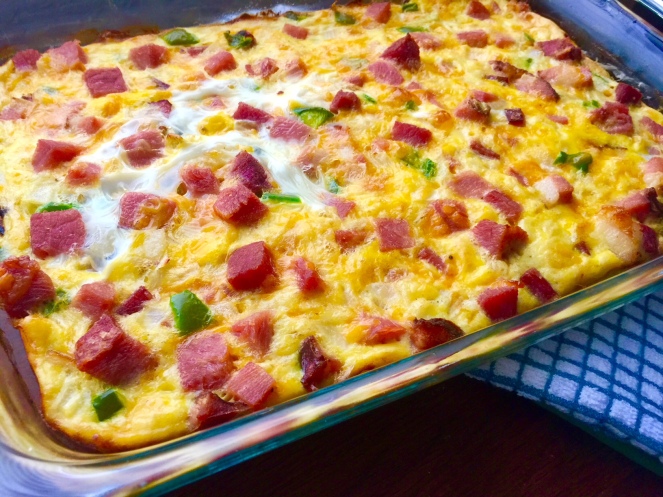