Before you throw me to the wolves, hear me out. It’s not that I don’t like peanut butter. I’m just not a rabid fan of the stuff. Will I eat a peanut butter and jelly sandwich? Of course! Will I purposefully seek one out to make? Not really.

I like Reese’s, sure. But I don’t typically get one from the candy aisle (I’m a Take Five kinda gal). Rob is so in love with peanut butter, on the other hand, he’ll eat it by the spoonful. He’s been known to put away a one pound tub of the spread in just a few days. I know when he gets ice cream, he’ll choose a peanut butter chocolate version. 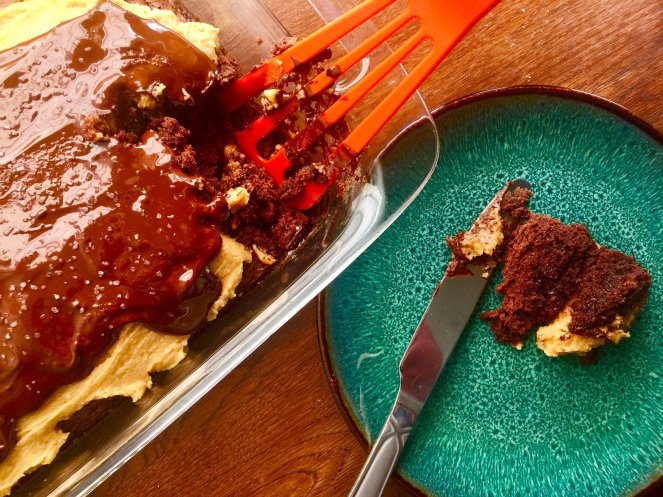 So, why, you may be asking, did I make peanut butter chocolate brownies?

I’m not heartless, you guys. I will make things for people that I wouldn’t typically make for myself.

I knew I wanted to make brownies this week, but I didn’t want them to be just regular old fudge brownies. Skimming through pinterest I stumbled upon a Peanut Butter turtle version. Thinking the “turtle” part was just a bit too much, I shortened the recipe to just be peanut butter & chocolate. Those two things would suffice well enough.

Plus, that’s where the “buckeye” part comes in. Buckeyes are those easy-to-make chocolate peanut butter candies you see around the holidays. Shockingly, I’m not a fan of those either…but I digress. These brownies aren’t just about me, they’re about people who love chocolatey peanut butter things!

I actually really liked the peanut butter topping on these brownies. It’s light and fluffy and really sweet and delicious. A quick chocolate ganache and a sprinkle of coarse sea salt, and these brownies are like heaven in a bite.

Everybody at work seemed to love them, too, and I think Rob was upset that I was sharing them with other people and not just him. I’m sure he could’ve eaten the whole pan if I left them at home! 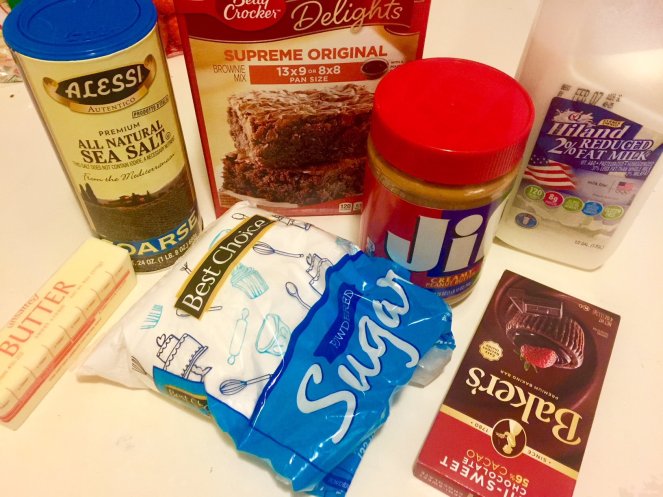 Make brownies according to package instructions.

Bake and then let cool.

In a stand mixer, whip together peanut butter, butter, powdered sugar and milk until smooth and creamy.