I feel like I have eaten my body weight in food the past couple of days. Anybody else feel that way after the Thanksgiving holiday? Ugh. I tend to over-indulge on delicious carbs during the holidays. I can stay away from sweets, but stuffing? Potatoes? Nope. They beckon me every time with their sweet, sweet carby-ness.

It also doesn’t help that I also ate chicken spaghetti on Thanksgiving Day. I had to work, and I told everyone else working that they should bring their family favorite for a potluck, and the most gigantic pan of chicken spaghetti waltzed through the door and sang to me with it’s luscious Velveeta. I couldn’t stay away for long.

So, everyday after Thanksgiving I have felt awful. Bloated. Full. I ate far too much. I still managed to convince myself I needed to cook something this weekend so I could have food to eat throughout the week. I scrounged up this recipe and it looked simple, fast, and slightly better for you than a tub of leftover stuffing and gravy.

This recipe was a breath of fresh air after the heavy feasting. It’s not necessarily a light recipe, but it doesn’t bog you down after eating it. I was rather surprised in the taste, considering there are zero spices involved. Smoked sausage tends to be on the salty side, so no added salt to this dish. I am quite the fan of red, orange and yellow bell peppers (green ones are bleh), so I knew I would like them mixed with the sausage and rice. Yum!

Heat olive oil in a large skillet over medium heat and add garlic. Cook, stirring, until garlic is fragrant, about 1 minute. Stir in smoked sausage slices and cook until browned.

Add peppers, broccoli, broth and tomato sauce and simmer for 10 minutes or until veggies are tender. 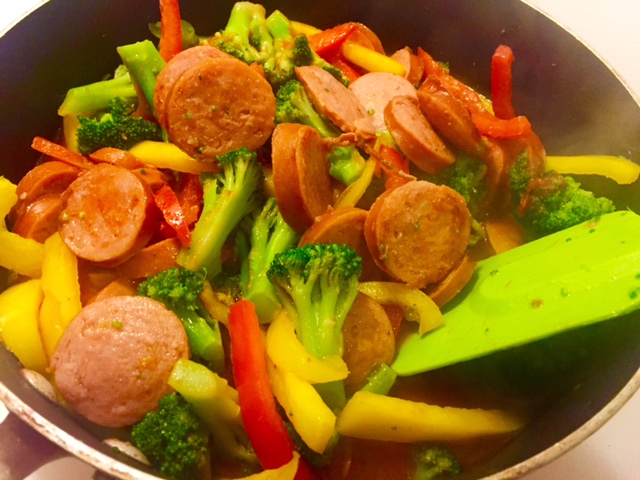 Stir occasionally while cooking. Mixture is done when liquid is mostly absorbed.

Cook rice according to package directions. Stir rice into skillet and sprinkle with cheese. Let cheese melt before serving. 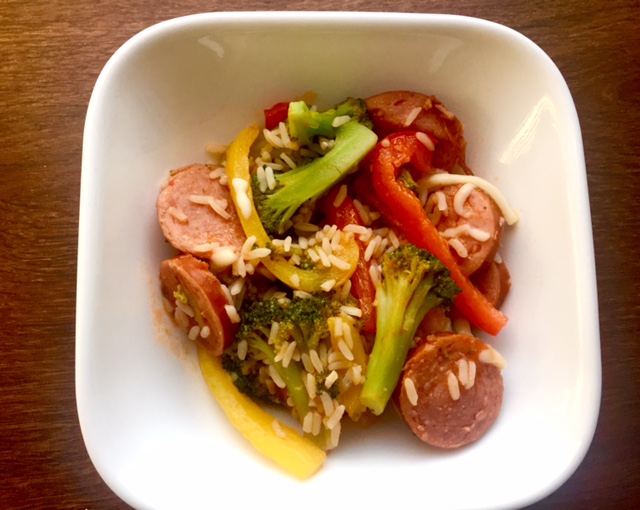