It was a wild night in Oklahoma last night…

Severe weather season has officially begun! Storms rollicked across the state, packing a major punch. No tornadoes in OKC, but really high winds caused a ton of damage, especially to State Fair Park.

The Centennial Arch, built in the 1970’s, didn’t survive. There was supposed to be a major horse show at the arena in the park this weekend, but thankfully they rounded up all of the horses and brought them inside so none were hurt.

These storms happened at night, which is incredibly dangerous. They rolled through OKC at about 5am, and my chief meteorologist woke me up at about 7am. My duty? To get out and survey and record the damage for our evening shows tonight. I even made an appearance on a competitor’s helicopter shot…

After a long day of traipsing through damage all across the city recording all sorts of damage, I finally got off work at 2pm. I made it to the grocery store to do my normal bi-weekly shopping trip then settled in at home to some Netflix & chill (with myself!).

I made this recipe last weekend and just didn’t get around to writing about it. I had found it in an old magazine full of recipes, and right away it stood out to me. Angel hair pasta? My favorite. Sea scallops? Luxurious pillows of the sea. Peas? A classic spring veggie. Those three things alone had me hooked (no pun intended).

Instead of a one-pot dinner, this was a billion-pot dinner. I used just about every dish in my kitchen, but that was probably my own fault. Don’t let that scare you away! This dinner is delicious, light, and fancy. Fancy-pantsy. Pan-seared scallops just scream haute-cuisine to me…but they’re so easy to prepare!

If you’re feeling frisky, and fancy, make this dinner. It fits the bill for both of those things. 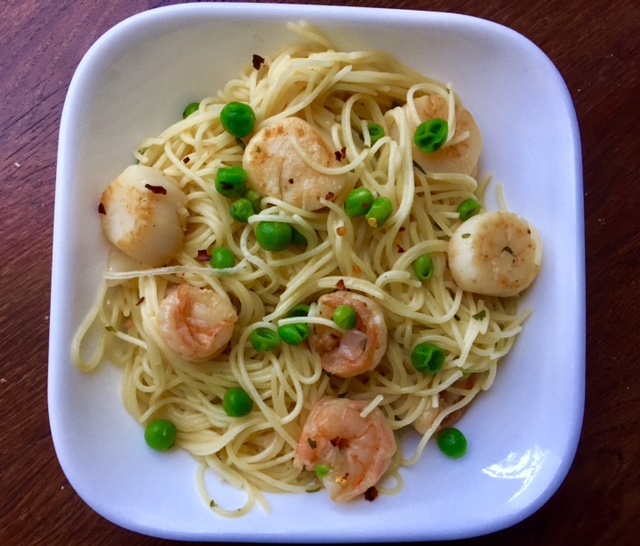 Meanwhile, in a large skillet, heat 2 TBS. butter over medium heat. Add shallots and garlic and cook until translucent and fragrant, about 2-3 minutes. Stir in white wine; reduce heat to medium-low and simmer, uncovered, until ready to serve.

Heat olive oil over medium-high heat. Sear scallops on both sides until a brown crust forms, about 2-3 minutes. Carefully transfer to a plate.

Add shrimp to same skillet and saute until pink, about 3-4 minutes. 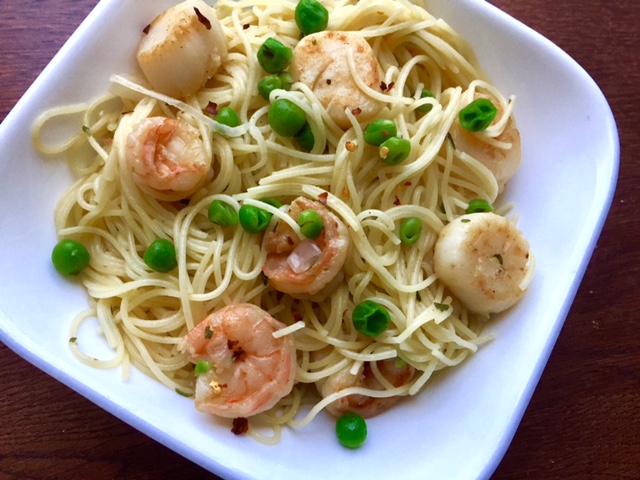