Who says potato salad has to only be a side dish?

Throw some protein in there and you can eat it for a nice, chill lunch. Or, at least that’s what I’m telling myself to make myself feel better for eating a bowl full of carbs for lunch today. 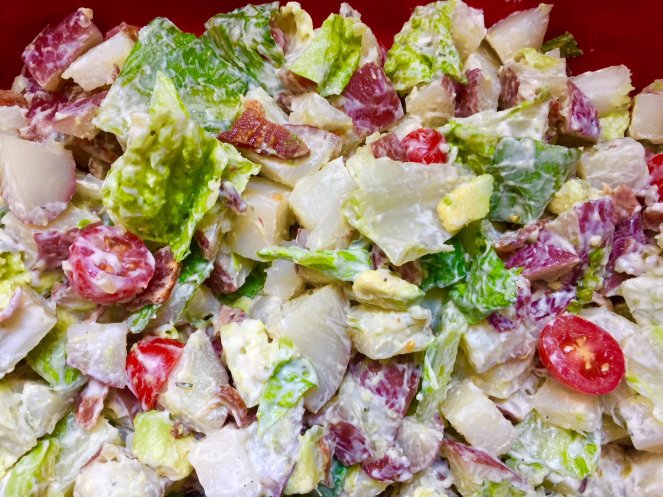 My constant experimentation with potato salad continues today. I’ve made a warm German-style version, my mom’s classic dilly version, a sun-dried tomato one, and a buffalo and blue cheese one. All of them are good on their own right, but this one steals the cake when it comes to eating it straight from the bowl and by itself.

I’ve always been a lover of a good salad side dish. When it comes to picnics and cookouts, I go for the macaroni or potato salads first. I’ll include cole slaw and broccoli salads in there for fun, too. It may be hard to believe it now, but I used to hate potato salad. 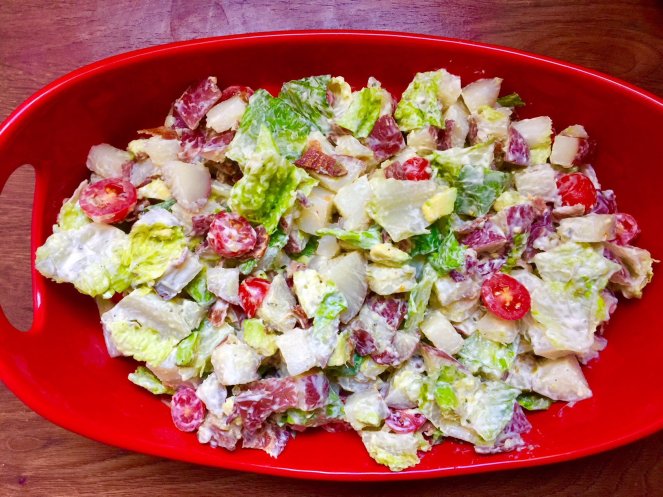 I mean I loathed the stuff when I was a kid.

Tastes change, and so do culinary adventures. I grew out of my potato-salad hating self and into a world-renowed potato salad provacateur. I made that last bit up, but humor me, okay?

When it comes to potato salads, the best choice of potato is usually your plain ol’ russets or Yukon golds. There easy to peel and cook, and they are generally flavorless so they soak up what ever mayonnaise and mustard drench you’ve got on had. Only twice now have I used red potatoes, and that’s for salads that I want a little more extra bite for. 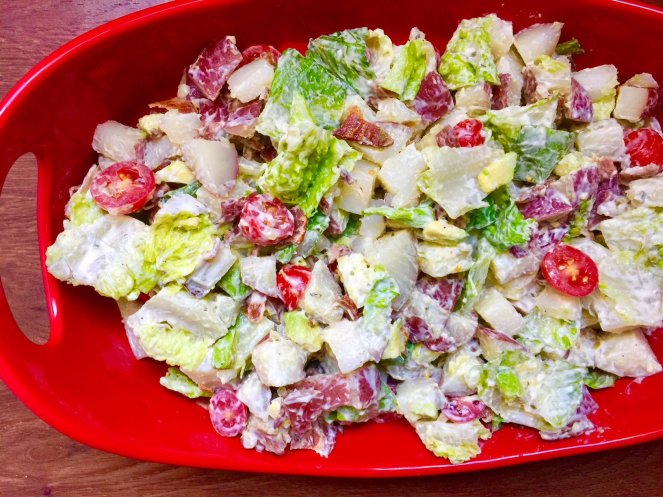 This is one of those times.

A simple dry ranch dressing mix sauce, with the crispy bacon and vibrant tomatoes—everything comes together in a cinch and tastes great. The romaine lettuce e. coli outbreak is over (even though the CDC just confirmed 5 new fatalities—they were delayed fatalities; it takes a while for the state to get with the feds) but if you’re still not comfortable using the crispy green lettuce, just sub in some iceberg or heck, even kale. 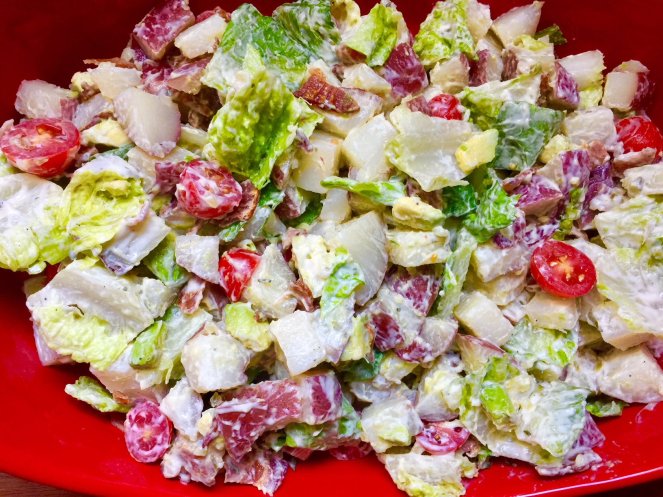 I wanted to use romaine hearts because they hold up well under heavy amounts of dressing and sauce. Kale would do fine, too, but iceberg might get soggy over time.

Toss in some halved baby cherry tomatoes and cubed avacodo and you have yourself a meal within a potato salad. Of course, this recipe works well with sandwiches and burgers, too. 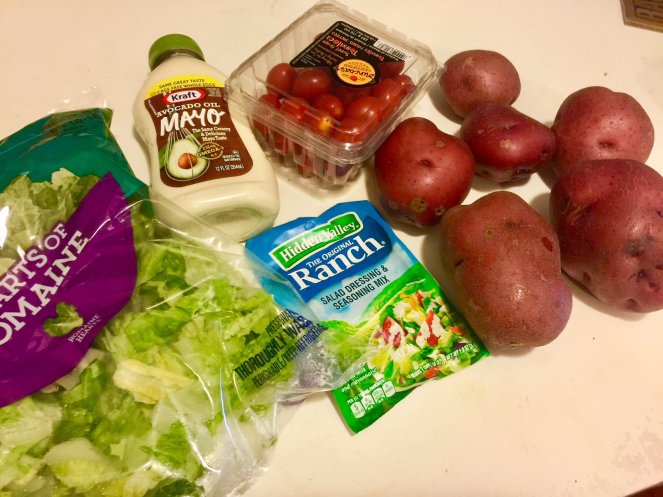 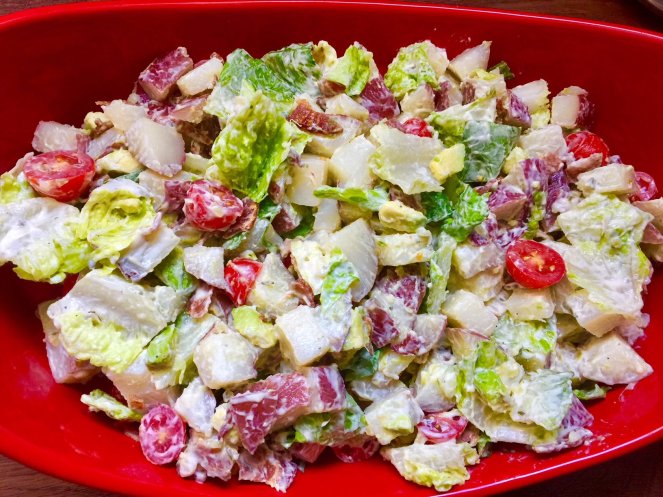 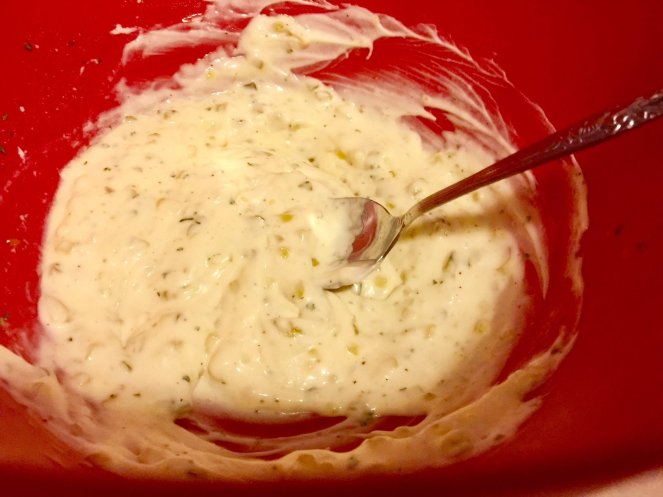 Place potatoes in a large pot of salted water. Bring to a boil over high heat and boil for 10-12 minutes, or until tender but not mushy. Drain and let cool. In a small bowl, whisk together mayonnaise, relish, vinegar and ranch dressing mix. 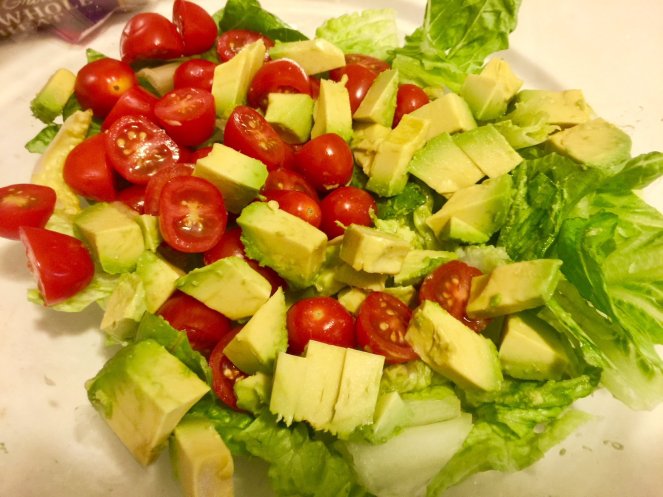 In a large bowl, toss romaine, tomatoes, bacon and avocado. 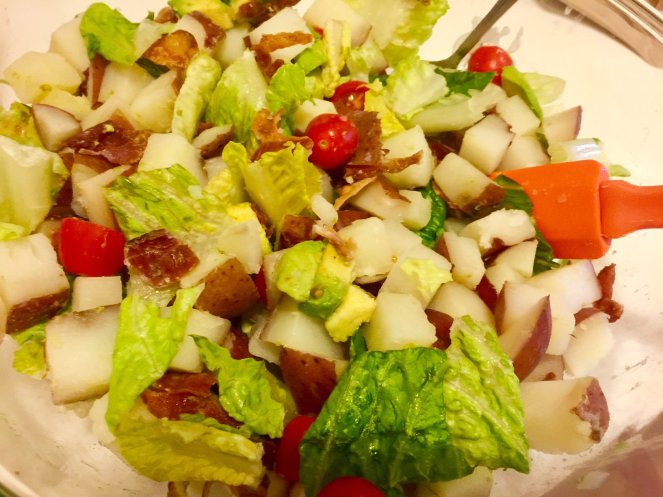 Add cooled potatoes and mayo-ranch sauce. Season with salt and pepper. until well combined. Cover and refrigerate until ready to serve. 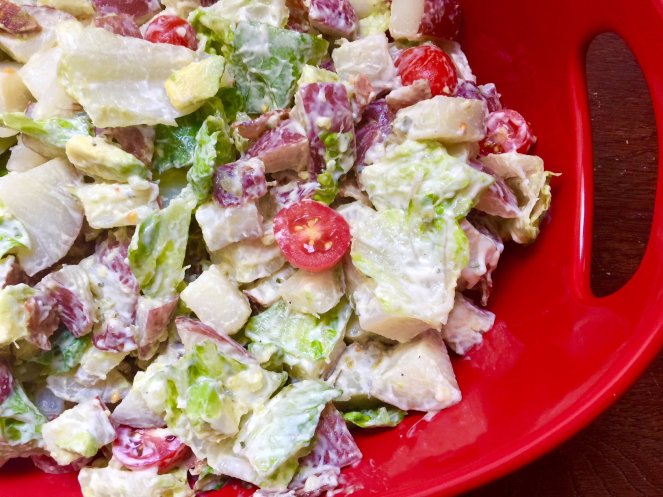