I’ve been on quite the culinary tour of OKC these past few days…and I need to stop. My “cheat day” turned into a cheat weekend. Yikes.

One fairly healthy treat I rewarded myself with this week was lunch from Provision Kitchen on Thursday. This fledgling restaurant is barely a year old, and they have the best farm-to-table takeaway food. Everything there is a meal for you to microwave at home or work, and I’m slightly obsessed with their Thai curry shrimp bowls. Each serving comes with huge prawns, roasted sweet potato, carrots, cauliflower, brussels sprouts, and broccoli all blanketed in a spicy/sweet/tasty curry sauce. Yum. 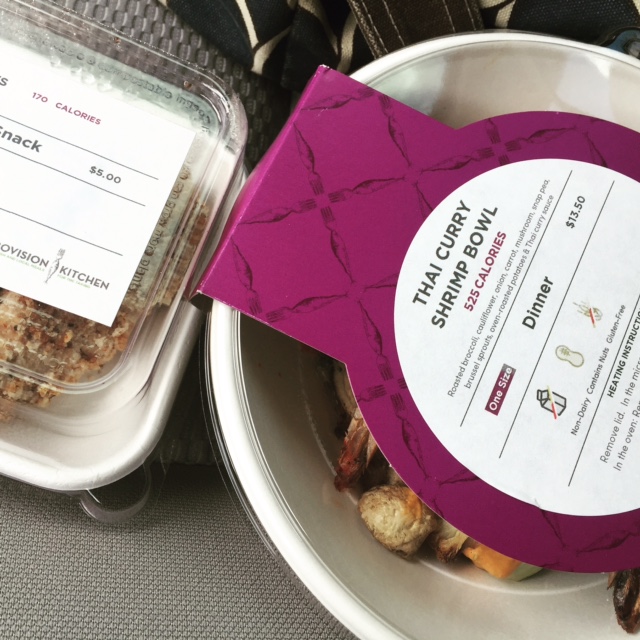 On Friday, my reporter, Phil, and I had some time to kill near the lunch hour. For the past four years he has been raving about Irma’s Burger Shack and he claims they have the best burger in OKC, so I decided it was time to give them a try. Better burgers than Nic’s? Better than Eskimo Joe’s? Really?

He was right. The burger patties are made from No Name Ranch beef and they are so soft, so tender, and include absolutely ZERO gristle. It was like biting into a pillow. A meaty, fantastic pillow. I had the Theta burger (when in Rome, right?) and was a little perturbed that they didn’t use shredded cheddar (classic Theta cheese) but I quickly forgot about that after my first bite. I guess Phil was onto something. 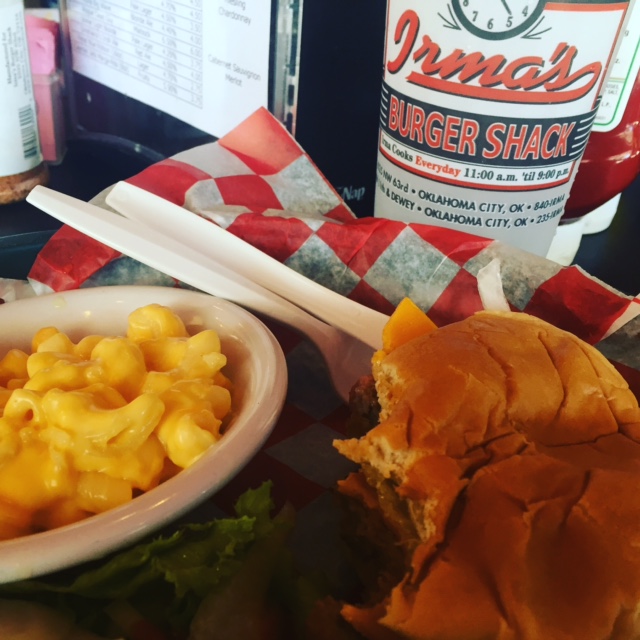 On Saturday morning Rob and I decided to try something new for breakfast before we went grocery shopping. Enter: The Diner in Norman. Yep. That’s the name! Plain and simple. The Diner.

Apparently the place has been on Diners, Drive-Ins and Dives before and is a hot spot among Normanites. I ordered their “famous” Eggarito: A burrito stuffed with eggs, chiles, tomatoes and onions and covered in a green chile ranchero sauce. I couldn’t finish the whole thing, it was gigantic! It was also very, very good. 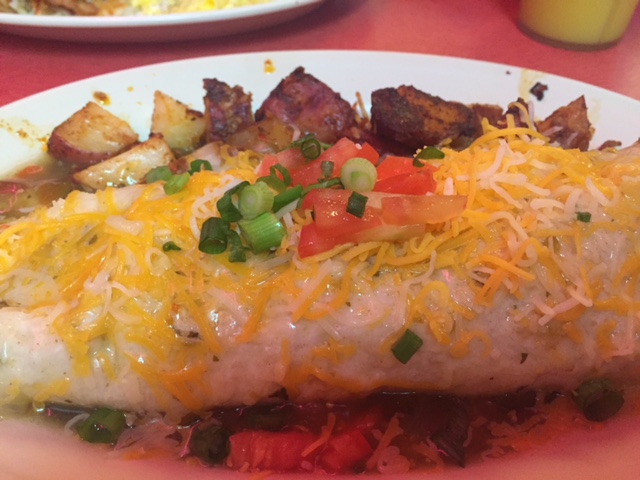 We got to The Diner at just the right time—it is a VERY small restaurant, with only about ten tables and a bar with ten diner stools. By the time we left, a long line had wrapped around the sidewalk of hungry folks waiting to be seated. I guess it was a pretty popular spot!

Back at home now, I am cooking up a storm in my kitchen. It is so cool and fall-like outside already, and I have gained the use of my oven once again. Oh, oven, how I’ve missed you so. 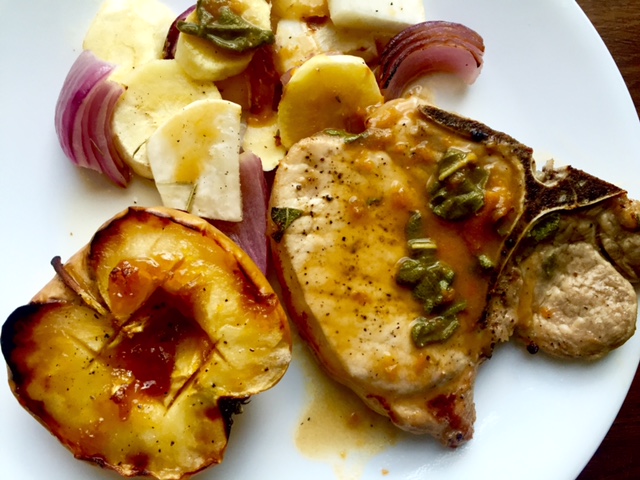 I made this dish for dinner last night. I was pleasantly surprised by how everything turned out! I am a huge fan of sage, and I sure love my root vegetables (rooties!). The parsnips, turnips and onions roasting in the oven made my house smell heavenly.

The recipe I used called for bone-in loin chops, but I couldn’t find anything labeled that at the meat counter. I used bone-in T-Bone pork chops (maybe they are the same thing?) instead and they worked wonderfully. Who knew marinating pork for 10 minutes and then broiling for 8 would make it taste so good?! 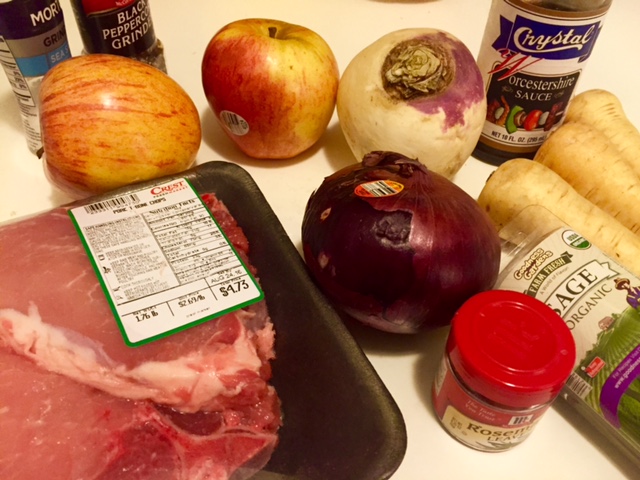 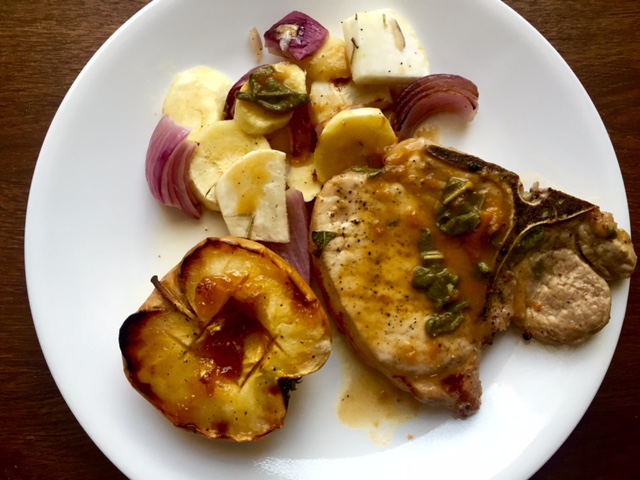 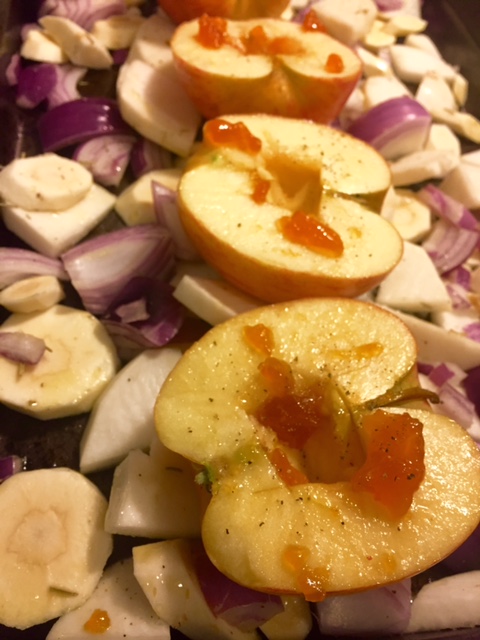 Toss parsnips, turnips and onion wedges with olive oil, rosemary, salt and pepper. Place on a rimmed baking sheet and top with apples, cut side up. 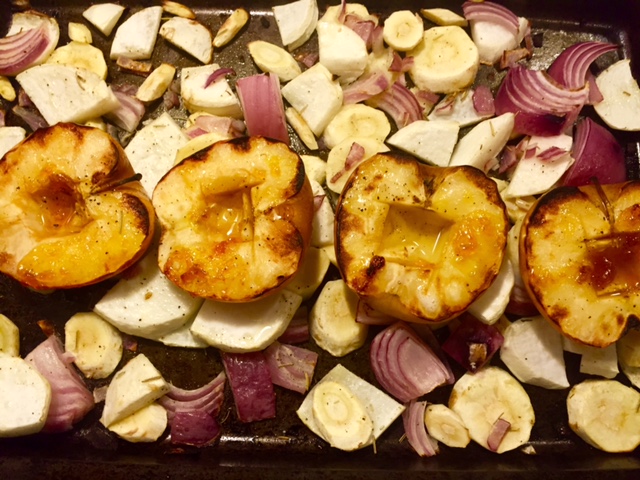 Brush the apples with 2 tablespoons of apricot preserves and sprinkle with pepper. Roast for 20 minutes and then broil for 5. 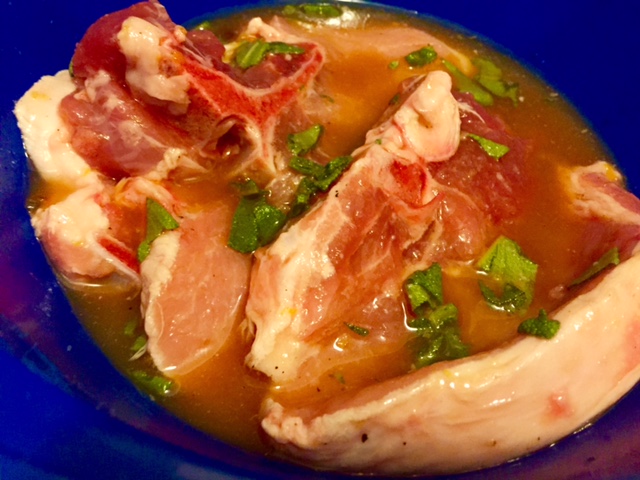 In a large bowl, combine the remaining preserves with 1/2 cup water, worcestershire sauce, sage and a sprinkle of pepper. Prick pork chops all over with a fork and add pork chops to the marinade and cover, set aside for 10 minutes. 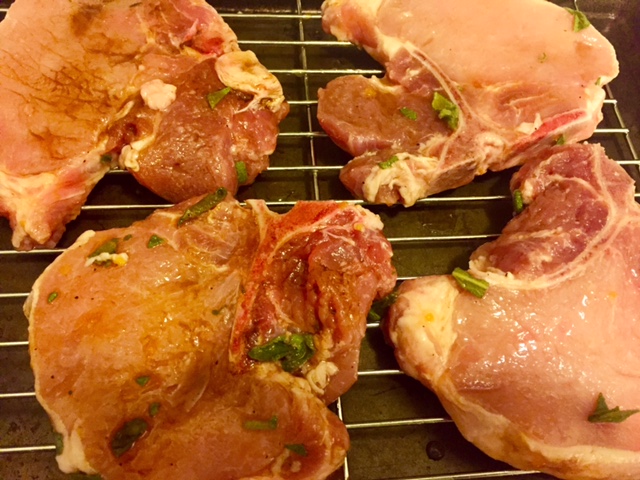 Place pork chops on a wire rack on top of a baking sheet. Broil for 8 minutes or until internal temperature of the thickest part of the meat reaches 145 degrees. 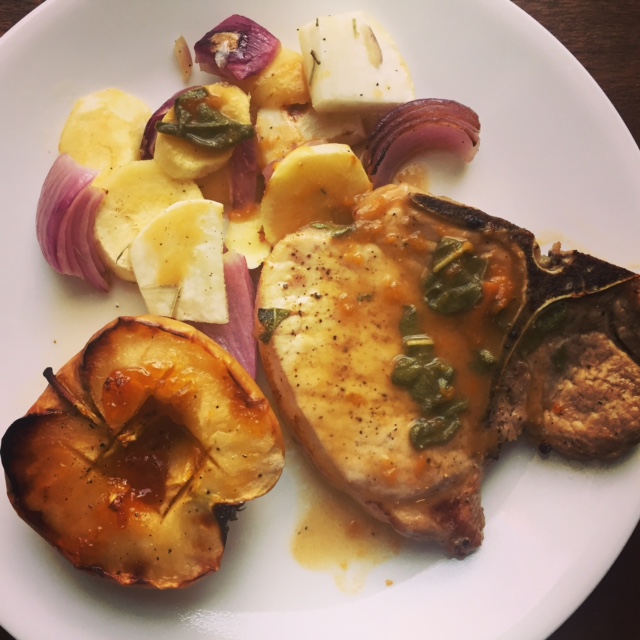 In a small saucepan, boil remaining marinade and then add a pat of butter. Stir until slightly thickened. Drizzle sauce over pork chops and serve with roasted vegetables and apples. 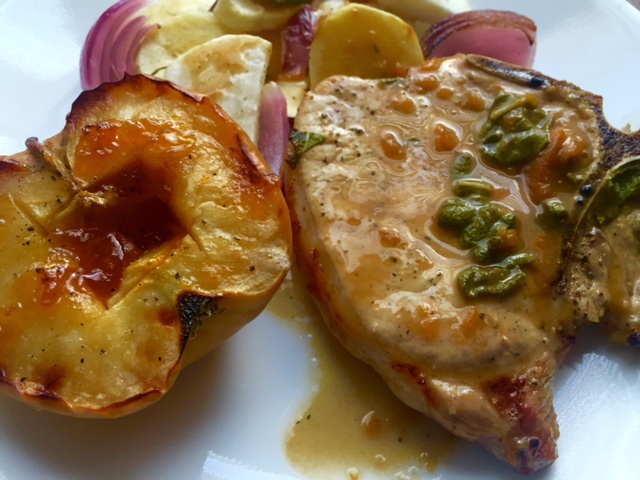